BlogNews
Solar Roofs Are Proven to Save Money and Cut Pollution

This article in American Infrastructure Magazine, by Rick Cunningham, president of Highland Commercial Roofing, ran in the Summer 2016 issue. 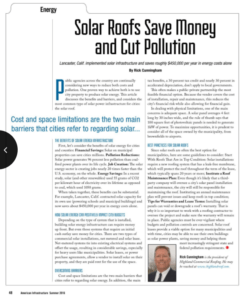 Public agencies across the country are continually considering new ways to reduce both costs and pollution. One proven way to achieve both is to use city property to produce solar energy.

Solar infrastructure can be installed on municipal property — often without a cost to the city — and it can immediately begin generating clean power and cutting energy bills. But there are some barriers to overcome. This article discusses the benefits and barriers, and considers the most common type of solar power infrastructure for cities: the solar roof.

The Benefits of Solar Energy Infrastructure

First, let’s consider the benefits of solar energy for cities and counties:

Solar on municipal properties can save cities millions.

The solar energy sector is creating jobs nearly 20 times faster than the U.S. economy, on the whole.

In a recent study, solar (and other renewables) used 55 grams of CO2 per kilowatt hour of electricity over its lifetime as opposed to coal, which used 1050 grams.

When taken together, these benefits can be substantial. For example, Lancaster, California contracted solar capacity for its own use (powering schools and municipal buildings) and as a result, saves about $450,000 per year in energy costs alone.

Depending on the type of system that is installed, building solar energy infrastructure can require money up front. But even those systems that require an initial cash outlay save money for cities.

Solar leases, or power purchase agreements, allow a vendor to install solar on their property, and they are paid rent for the use of the space.

There are three main ways that municipalities can build a solar energy infrastructure:

Buying energy from a farm and building farms on existing properties are typical examples of net-metered systems. The rooftop photovoltaics can be a net-metered proposition if the city purchases and installs the equipment itself, or it can be a solar lease if they allow a vendor to install and manage the system.

Cost and space limitations are the two main barriers that cities refer to regarding solar energy. In addition, the main tax benefits, a 30 percent tax credit and nearly 30 percent in accelerated depreciation, don’t apply to local governments.

This often makes a public-private partnership the most feasible financial option. Because the vendor covers the cost of installation, repair and maintenance, this reduces the city’s financial risk while also allowing for financial gain.

In dealing with physical limitations, one of the main concerns is adequate space. A solar panel averages 4 feet long by 30 inches wide, and the rule of thumb says that 100 square feet of photovoltaic panels is needed to generate 1kW of power. To maximize opportunities, it is prudent to consider all of the space owned by the municipality, from brownfields to airports. For example, cities like Denver have used public school rooftops.

Since solar roofs are often the best option for municipalities, here are some guidelines to consider:

Start With Roofs That Are in Top Condition

Solar installations require a new roofing system that has a leak-free membrane, which will protect the roof throughout the term of the lease, which typically spans 20 years or more.

Even though it’s likely that a third-party company will oversee a city’s solar panel installation and maintenance, the city will still be responsible for maintaining the roof. Instituting an annual maintenance plan will prevent issues and keep roofs in top condition.

Installing solar panels can void or downgrade a roof’s warranty. That is why it is so important to work with a roofing contractor to oversee the project and make sure the warranty will remain in place.

In addition, roofing warranties are typically guaranteed from 10-30 years, but solar roofing systems can have warranties as short as 12 months. Look for roofing system “leak free” warranties that are as close as possible in length to solar warranties when installing a system to provide the maximum protection.

Also consider aligning the roofing warranty to the lease term, when possible, to ensure the roof is covered during the entirety of the lease.

Public agencies must be ever-vigilant where budgets and pollution controls are concerned. Solar roof leases provide a viable option for many municipalities and with time, cities may be able to use their own buildings as solar power plants, saving money and helping them meet increasingly stringent state and federal pollution requirements.