This article in PRISM magazine, by Rick Cunningham, president of Highland Commerical Roofing, ran in the February 2017 issue. 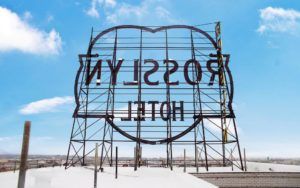 It was a “Million Dollar Hotel” with a century’s worth of history, sowhen it came time to renovate the Rosslyn Hotel in downtown Los Angeles into affordable housing, developers turned to Highland Commercial Roofing to ensure its protection.

The SRO Housing Corporation of Los Angeles funded the conversion of the hotel into affordable housing for homeless veterans and low-income individuals. Highland Commercial Roofing was called in midway through the project to deal with the century-old roof. A crew from the company labored for six weeks on the project in 2014. “It was orchestrated perfection,” said project manager Kris Watson.

The century-old building provided some formidable challenges to the crew despite only having to deal with a relatively small 10,000 square feet of roof. They had to work around sign braces and a water cooling tower while new equipment was being installed on other platforms. The condition of the 100-year-old concrete was also an issue as it had grown brittle.

A hand railing system had to be built all the way around the low parapet walls of the roof. “It was a slow, meticu 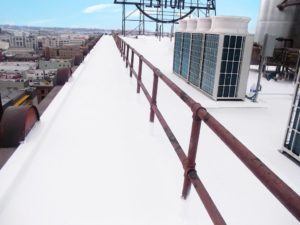 lous project,” Watson said. “Safety was a huge concern. They had to be tied off 100 percent of the time. A gust of wind could knock someone off the building.”

The crew was unable to use a regular roof penetration jacks due to conditions, so they developed workarounds. “It was out of our realm a little bit, and we had to adapt along the way,” Watson said.

The Highland crew installed a RainShield® Commercial Roofing System. After roof preparation, they laid down two layers of waterproofing grade asphalt, each reinforced with a layer of polyester reinforcement to provide a seamless, waterproof roofing system, but the process wasn’t as simple as it sounds. 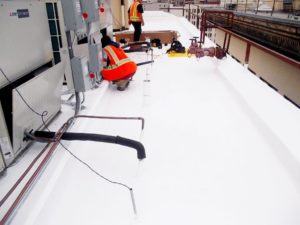 “The building is 14 stories high, so we had to hand-carry all the material through a service elevator and do everything by hand,” Watson said. “Usually we have a hydraulic pump that will pump the material up to the roof. Because of the block on the parapet walls we couldn’t terminate the membrane like they normally do, so we had to use SBS SA modified bitumen to self-adhere it to the wall and use concrete cap nails for a secure termination, then we sealed the top of the base flashing with acrylic elastomeric flashing compound reinforced with polyester mesh.”

The last step in the Rainshield® Commercial Roofing System application is the installation of 3 gallons of UV reflective acrylic elastomeric surfacing per 100 square feet. “Basically when we applied the final white surfacing we went heavy to saturate the porous surface of the concrete parapet walls to achieve a waterproof seal,” Watson said. 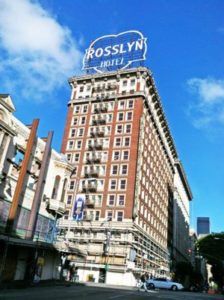 We had to pull off and work along with other trades,” Watson said. “We couldn’t just go in and blow and go.”

Since the system is water-based, the other subcontractors had to cooperate with the Highland Commercial Roofing crew and work around their schedules to wait for cure time. It required 48 hours for the ambient air temperature to dry the materials.

“We held weekly meetings on-site with all the contractors,” Watson said. “Everyone met to get on the same page. The whole duration of the project, there were multiple meetings to make sure that no one was stepping on each other.”

It cost the once-stunning amount of $1 million to build the hotel in downtown Los Angeles back in 1914, and it was proudly marketed as the “New Million Dollar Hotel” on rooftop signage. With a combined 1,100 rooms and 800 baths, it was the largest hotel on the West Coast at one time. Architect John Parkinson designed both buildings in the Beaux Arts style.

The successful completion of the roofing project is a matter of pride for Watson in no small part due to the rich history of the building.

“It was the best feeling,” Watson said. “I’ve had really cool projects where I’ve worked with a tremendous amount of people, but I took a lot of pride in this one because of its history. They wanted to revamp the hotel and make it look like it did in the 1920s. You don’t really get the opportunity to roof a building like this very often.”

“I feel very impressed with the project,” Watson said. “I ran it efficiently and to the best of my ability. I’m proud of it for the homeless vets. I’ve taken my son by it. It’s a really good feeling, not only that we installed a great system that is guaranteed leak-free for 20-years, but we also did our job very well as there have been zero leaks.”