Under previous tax codes, large capital expenditures were subject to depreciation timetables dictated by the IRS. The cost of a new roof, for example, had to be depreciated over 39 years. For context, an owner who purchased a new roof 15 years ago for $300,000 would have had the ability to write off only $7,700 per year, or $115,385 through today.

Most building owners and managers expect their new roof to last longer than the roof’s warranty period.  The longest warranties offered for commercial roofing systems is 25 years, and the most commonly purchased commercial roofing systems have only a 15 or 20 year warranty.   Combined with a lack of yearly preventative maintenance. This inevitably leads to an accelerated roof replacement schedule for most owners, restarting the 39-year clock to depreciate the capital expense. 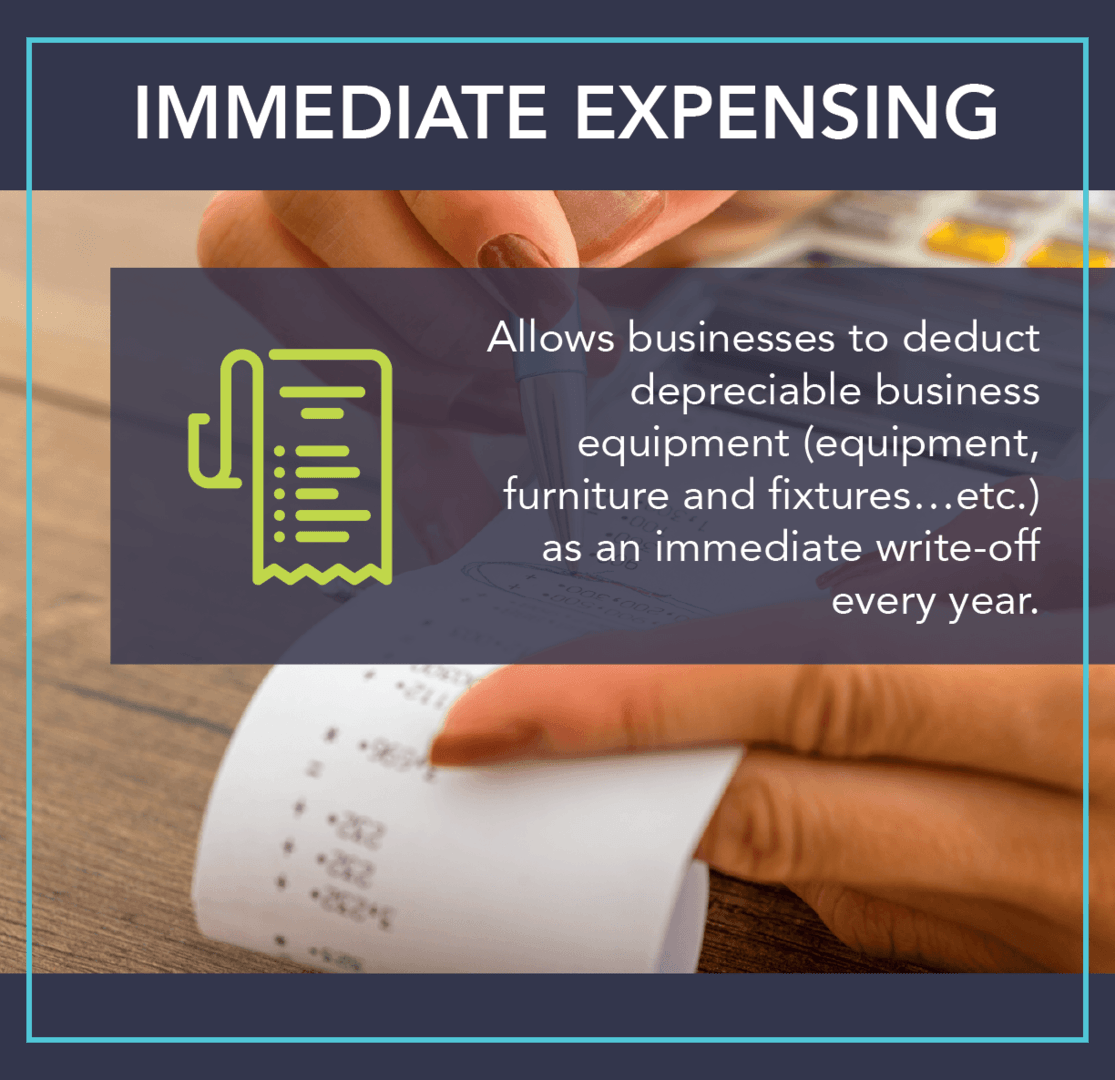 For many businesses, it would be more advantageous to deduct the entire outlay for capital building improvements as an immediate expense. Immediate expensing exists in the tax code – Section 179, allowing businesses to deduct depreciable business equipment (equipment, furniture and fixtures…etc.) as an immediate write-off every year. Problematically for business needing a new roof, property and building improvements were not on the list of Section 179 qualified goods to be expensed in the year that they were put into service. 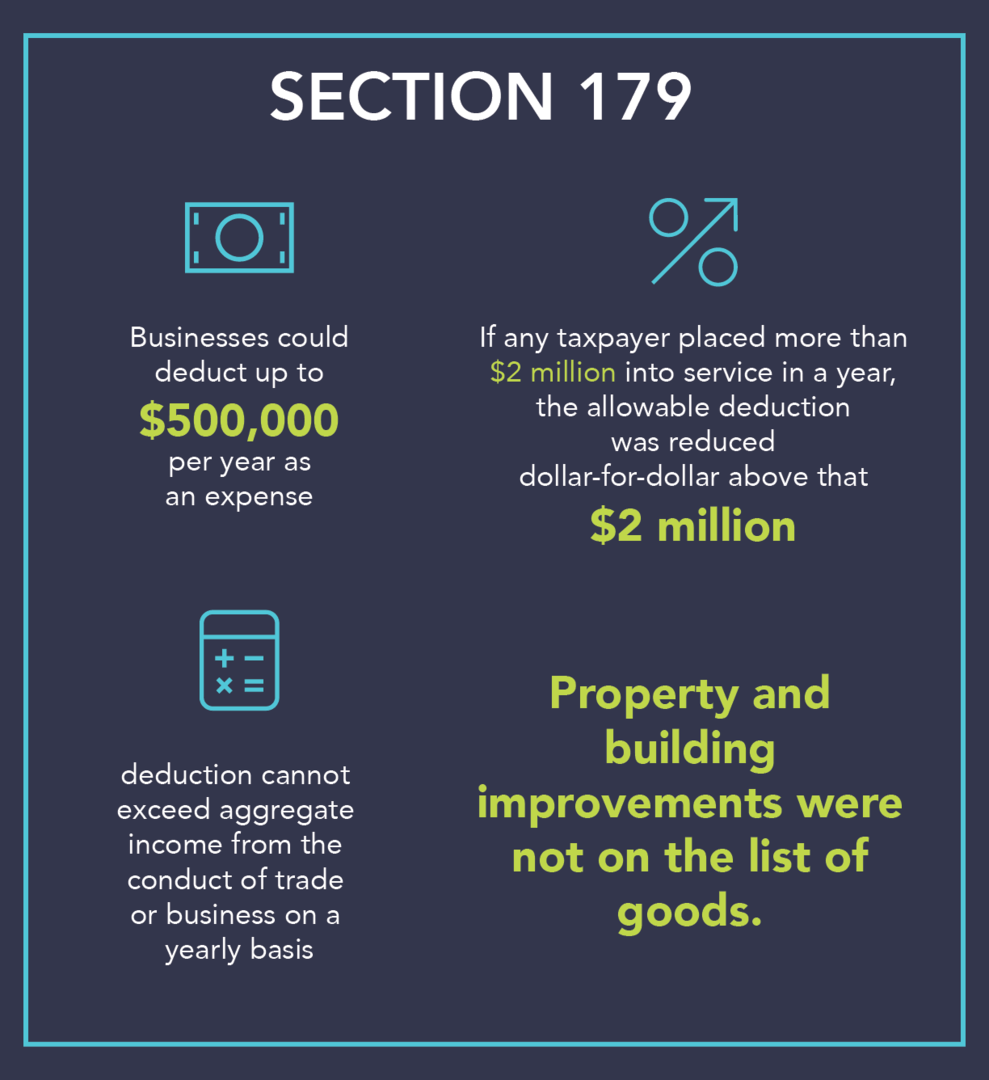 The new “Trump Tax Code” allows the full tax write off of most short-lived capital investments. There is a maximum annual deduction of $1,000,000 and a phase-out of this benefit when total capital improvements exceed $2,500,000 for the tax year.  This is not limited to the specific items or categories that Section 179 required in the past, but was expanded to include capital and building improvements which means now, the expense for a roof replacement can potentially be written off entirely in one lump sum. In the example above, the building owner would be able to write off the entire $300,000 cost of the new roof this year rather than deduct the $7,700 per year for 39 years under previous tax code.  You should consult your tax professional to determine how these rules may apply to your specific circumstances. 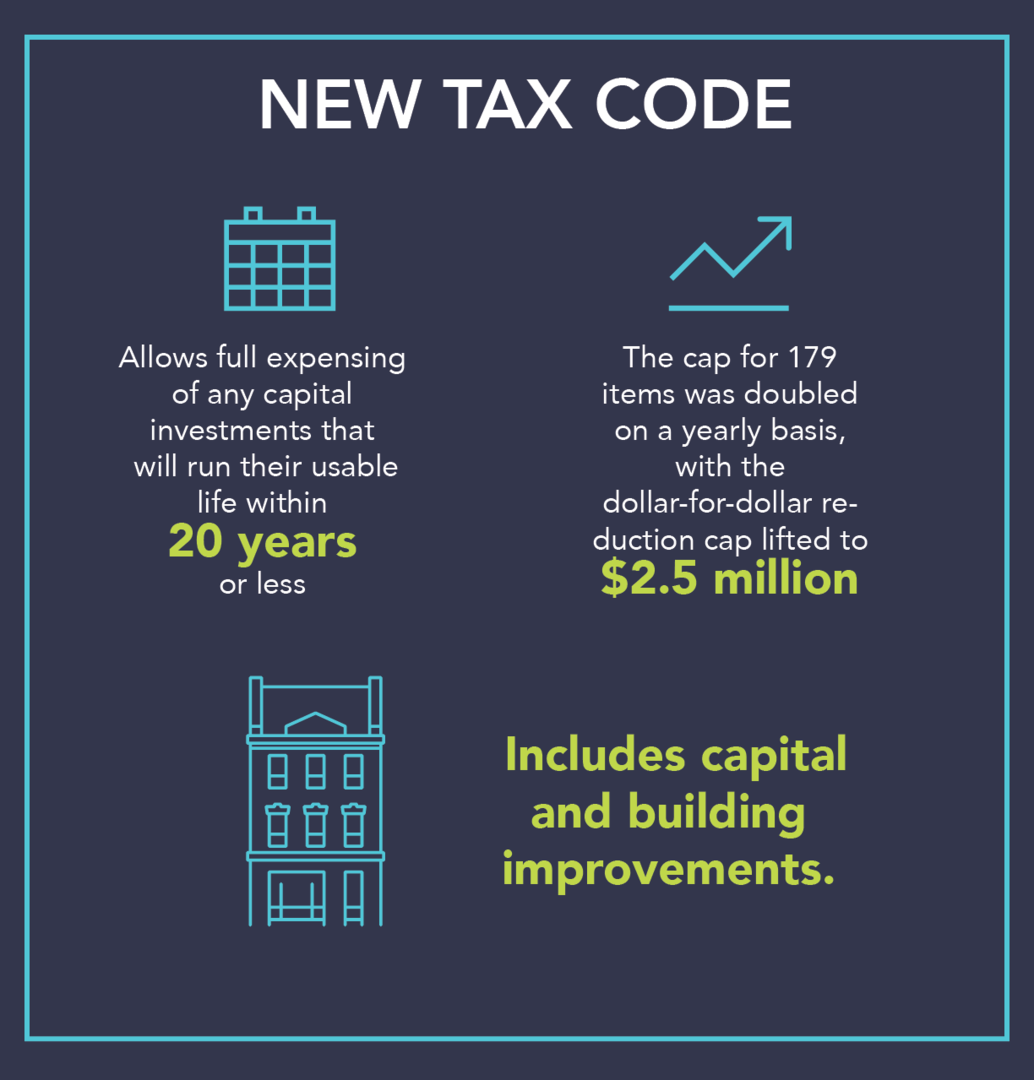 The Effect on Commercial Roofing

Under previous tax codes, minor roof repairs were allowed to be accounted for as an operating expense and could be written off in the same year. Major repairs and roof replacement costs however, were treated as a capital expenditure and were required to be depreciated over ”the life of the building”. For some companies it just made sense to undergo successive small roof repairs, allowing them to deduct the costs against that year’s business income instead of making a long-term investment that they would then write off for years to come. 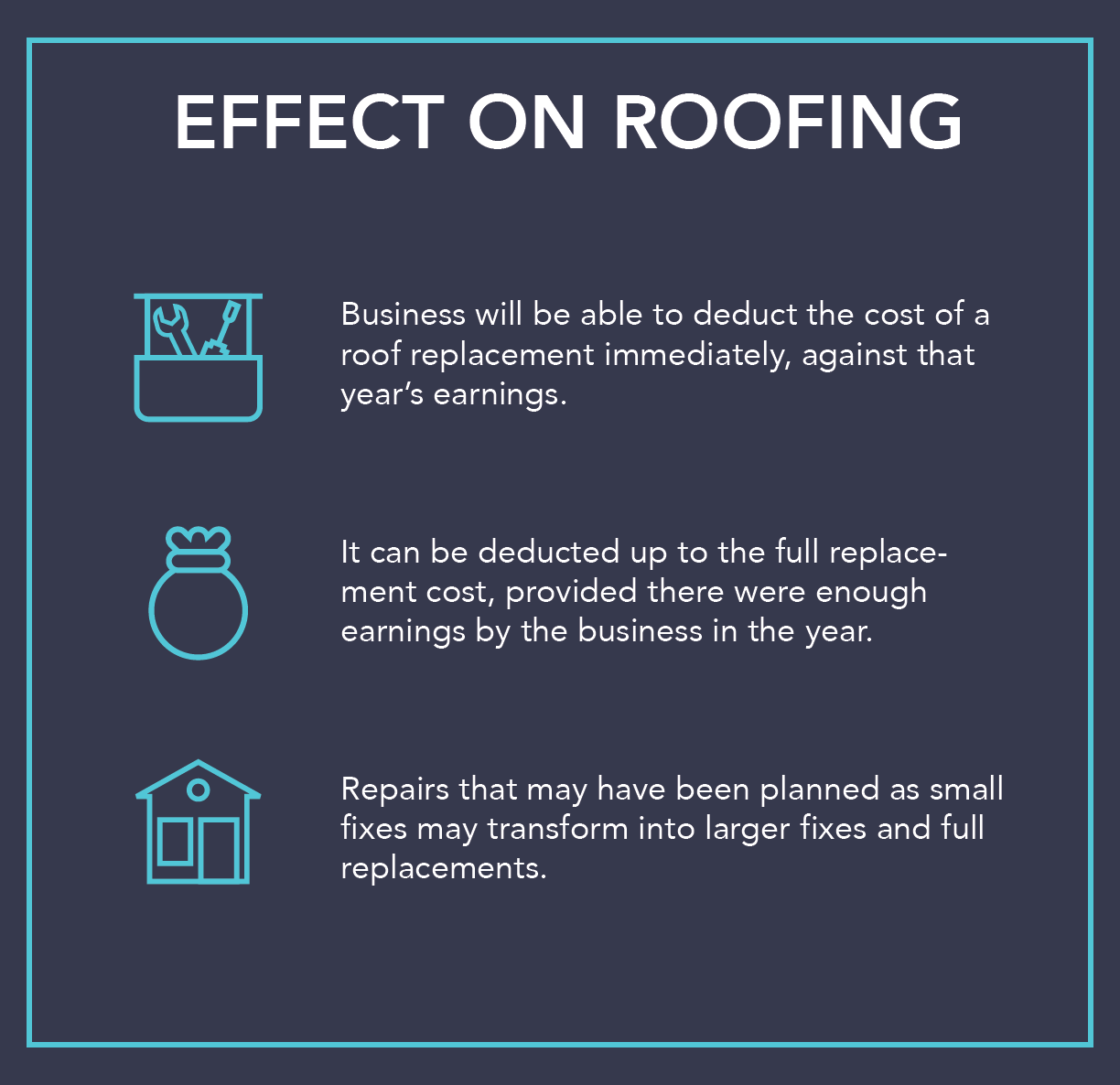 With the new tax code, businesses potentially will be able to write off the cost of a roof replacement immediately, against that year’s earnings, subject to annual limitations previously mentioned. The cost can potentially be deducted up to the full replacement cost of the expense provided there were enough earnings by the business in the year to cover the expense. This means that repairs that may have been planned as small fixes may transform into full replacements.

How Long Will It Last?

Success in life is all a matter of timing. The tax code is set to last through 2025, we all realize that the tax code can change with the whims of the majority in power. With mid-term elections coming up and the 2020 presidential election already on the horizon, there is a clear possibility that these favorable changes in the tax code could be short-lived. This could persuade those businesses that are on the fence to act sooner so they can absolutely take advantage of the immediate expenditures instead of risking the possibility of losing that opportunity four or five years down the line.

One of the hopes for the new tax code is that it will create more jobs, both in the area of business operation as well as business support. By freeing up capital for individual building owners, building improvements are more likely to occur. Immediate cost recovery through tax relief moves the tax base toward a cash-flow system. This increases the incentive for investment. 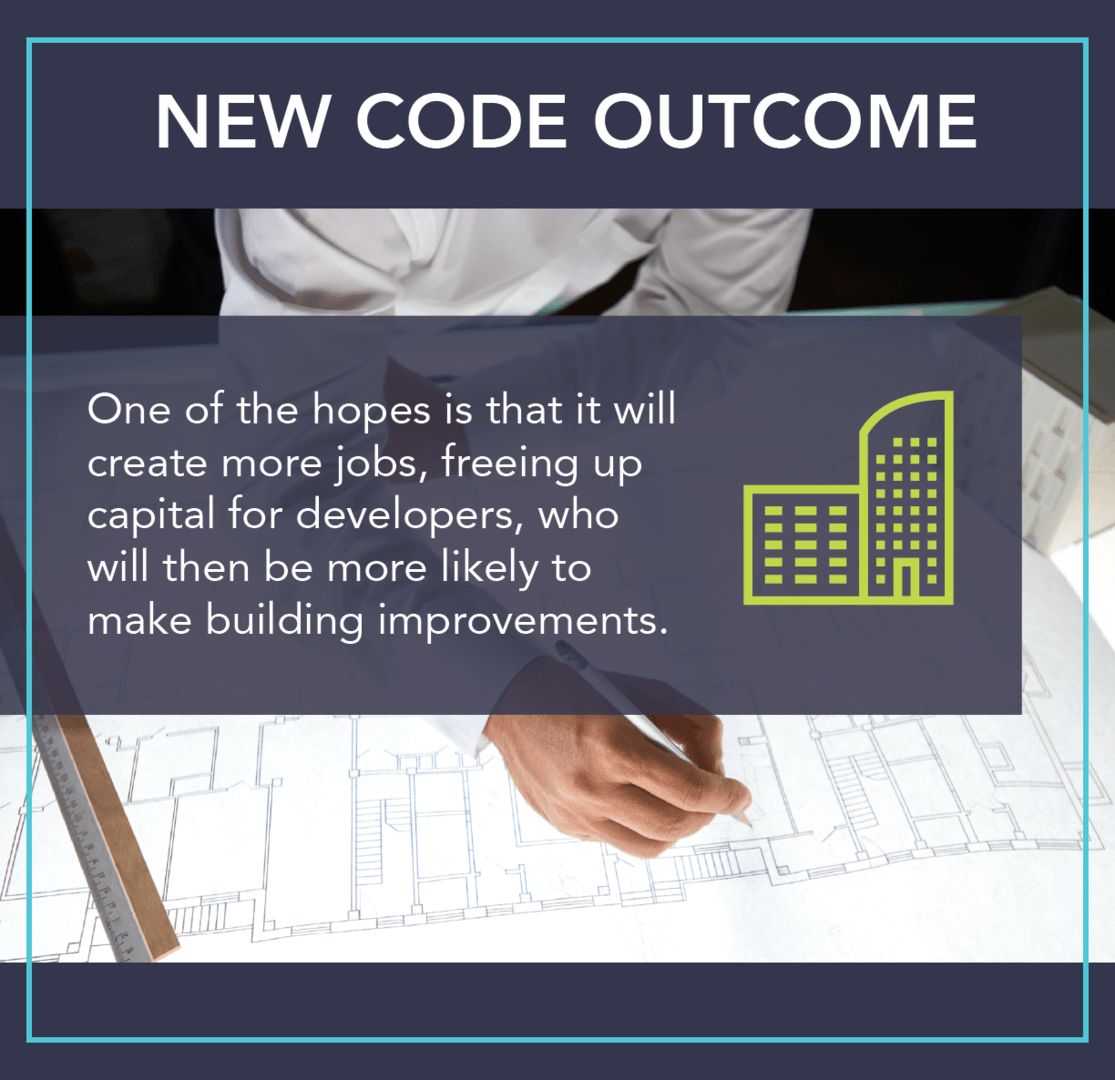 Highland Commercial Roofing is anticipating that this new tax code will change the buying habits of its more savvy customers and expects an increase in demand for roofing over the next few years.  With offices throughout the western United States they are uniquely qualified and prepared to meet this pressure head-on with the same high quality materials, quality installation techniques, and service as they have since 1991.