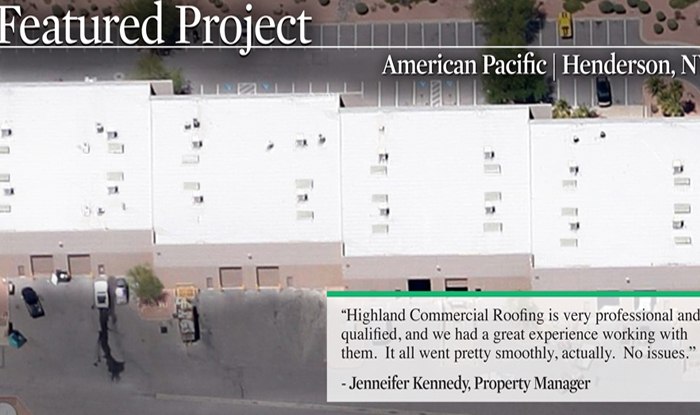 Highland Commercial Roofing is pleased to announce the successful completion of American Pacific re-roof project in Henderson, Nevada. Built in 1994, the 40,000 square foot office/industrial building occupies a prime location with convenient access to the I-215 Beltway and offers close proximity to the Las Vegas strip and McCarran International Airport.

The project involved a fairly straightforward re-roofing need; the 20-year old built-up roof was at the end of its service life and was beginning to show signs of excessive wear from the elements. That gradual wear-down of the roof also contributed to drainage issues, which were addressed within the scope of the project.

While still relatively new, the structure, like many in the Las Vegas climate, was beginning to show signs of fatigue from the average of 210 days of solar radiation per year. As a result, the BUR roof surface had become brittle, with severe granule loss, leading to new drainage issues for the building. Las Vegas also averages just over four inches of rain annually, however it can often occur in large bursts, putting a strain on the best roofing system. So potential leakage from cracking seams was also a primary consideration. The structure was fully occupied at the time of the work, so the work needed to be completed with minimal intrusion on tenant spaces and activities.

Property managers for American Pacific chose Highland Commercial Roofing to install a RainShield® Seamless Commercial Roofing System over the existing roof structure and remediate all drainage issues. They chose the Highland’s RainShield solution because it is well-known as a highly cost-effective system that completely eliminates the possibility of leaks by sealing off all seams. RainShield® also doubles as a cool roof surface that reflects sunlight and protects the structure from excessive heat loads. The system installed was the RainShield® 85 mil seamless single-ply system with a 15-year unconditional guarantee.

The project was completed on-time, on-budget and with no issues. “Highland Commercial Roofing is very professional and qualified, and we had a great experience working with them,” says property manager Jennifer Kennedy, adding, “It all went pretty smoothly, actually. No issues.”

All roofing systems eventually reach the end of their useful service life and when they do, the effort, expense and hassle of continued maintenance can far exceed the cost of roof replacement. Roof replacement can also be expensive, but the RainShield® Seamless Roofing Systems provide building owners a cost-effective long-term alternative. With over 70 years of proven success, RainShield® Roofing Systems can cost less than half that of a BUR, TPO or PVC replacement and are available with an Unconditional Leak-Free Guarantees for up to 30 years. For more information on this project or RainShield® Seamless Roofing Systems, contact Highland Commercial Roofing at 1-800-920-3659.